Probably the most fun I have had as an exhibition designer was during Manuel: The Star-Spangled Thank You Tour. This exhibit featured the fashions and styling of Nashville designer, Manuel Cuevas, the last of the Cowboy Couture designers. The dapper and charming Manuel is the man who put Elvis in a jumpsuit and suggested Johnny Cash wear black. His designs have graced the backs of Hollywood and Nashville’s leading stars for decades and he has made an indelible mark on American popular culture.

Manuel Cuevas in the gallery during the opening

From humble beginnings in Mexico, Manuel first made his name and reputation on California’s Rodeo Drive before moving to Nashville, Tennessee, in the late 1980s. His atelier is a former bordello nestled amongst the honky tonks on Music Row with workrooms upstairs and the downstairs parlors utilized as showrooms and fitting rooms.

In preparation for the exhibition I was fortunate enough to travel to Nashville at the same time Manuel was receiving a lifetime achievement award from the Country Music Association. The award ceremony included a star-studded fashion show organized by Manuel’s daughter, Morelia Cuevas. I also got to visit his showrooms and select garments for inclusion in the show.

The installation at the Gilcrease Museum was actually the second venue for this show. It was originally conceived by the Frist Center for the Visual Arts in downtown Nashville. As a thank you gesture to the nation that gave him his chance, Manuel created a series of fifty embroidered jackets, one for each state in the Union. The Frist featured the fifty jackets plus additional designs created by Manuel now in the collection of singer/producer Marty Stuart. Each bolero jacket is made of red, white, or blue wool gabardine and embellished with embroidered symbols representative of each state. And in true Nashville style, each jacket is also liberally encrusted with sparkling crystal rhinestones.

For the installation at the Gilcrease I added several special designs from the Nashville showroom in addition to a suite of stage costumes worn by the Oak Ridge Boys, several performance costumes worn by Linda Ronstadt, a jacket from Roy Clark, and the jacket worn by Emmylou Harris on the cover of the Trio album. 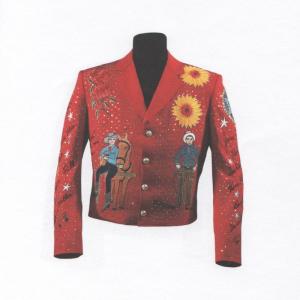 The Oklahoma jacket embroidered with Will Rogers

The Gilcrease Museum’s installation was staged in the Getty Gallery, a 3,500 sq. ft. space encompassing three separate rooms. I filled each room with tiered platforms, painted midnight blue, as were the walls. Curved, black wrought iron brackets with black cord ropes separated gallery visitors from the garments without impeding their view.

I designed several carved ceremonial arches to line the walkway through the galleries. The archways utilized Manuel’s signature red rose and barrel cacti. In the main gallery space the fifty bolero jackets were arranged from the west coast to the east, with many of the jackets mounted on rotating turntables facilitating viewing from all sides. A tribute video created by the Frist was shown in one gallery. A musical soundtrack also filled the galleries with life and vitality.

The state jackets on their turntables

Manuel, his family and entourage attended the opening events which included a spirited auction of a custom Manuel jacket during the gala dinner. 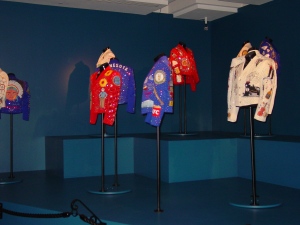 The red Oklahoma jacket on the left

This entry was posted in Uncategorized. Bookmark the permalink.